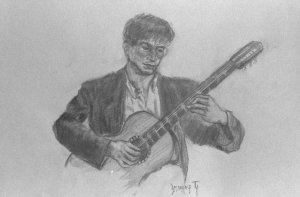 Do you want to hear my last composition ("Nocturne fantasque" for strngorchestra)...

Fabrice Holvoet got in1985, European Music Year: a Degree in Musicology (Louvain-la-Neuve, Belgium), a Premier Prix of Music Theory and the Government Medal for Guitar (with teachers like G.Ficara and R.Lacirignola). At the Brussels Conservatoire, he studied with Norbert Leclercq (in the class of I.Alfonso) and quickly earned his Premier Prix and Higher Diploma for Guitar and also Chamber Music (with Guy Van Waas).

He also attended master-classes with first rate musicians: D.Russel, R.Smits, M.Sadanowsky, R.Aussel and works now with Pablo Marquez. In 1990, the history of the instrument. As a winner of the "Banc d'Essai" competition (Radio 3, Belgium), he had already presented a radio broadcast on the same subject. Since 1990 he has played a guitar by the Belgian instrument maker Noël Callaert.

He is also active as a guitar player in chamber music ensembles presented on this site.

He has also founded the Belgian Guitar Review Guitares... and an association called Contréclisse which produces classical music CDs.